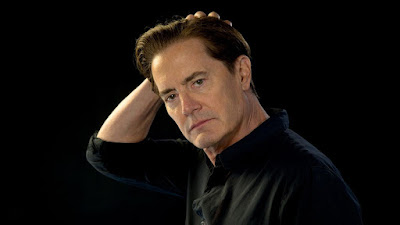 Check out the latest interview of Kyle MacLachlan with the L.A. Times's Glenn Whipp. They discuss at length Kyle's acting process in bringing to life Agent Cooper, Mr. C, Dougie, and a couple of other variants of his character alongside director David Lynch while filming Twin Peaks: The Return (2017). I love this guy and his passion about his work.
Among other topics, Kyle MacLachlan discusses his evolving understanding of filmmaker David Lynch and offers some of his thoughts on what the ending of Twin Peaks means to him, personally. Kyle offers many insights into his life, career, and thinking, particularly as it pertains to Twin Peaks. Among Kyle's interesting reveries is what that ending of the show meant for Agent Cooper's character. This is a seriously good interview that offers many informative anecdotes on how he delivered such a strong, emmy-nominated performance for the show.