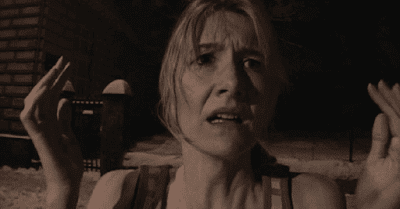 Next we explore Malmrose Projects's video essay on David Lynch's Inland Empire (2006). Where Mulholland Dr. (2001) was gorgeously filmed and executed, David Lynch's follow-up film was his first feature film to be entirely shot on home video quality Digital Video. Lynch said he liked the texture of the video, which reminded him of the silent film era of blotchy film.

And in a weird way, Inland Empire (2006) does feel a little like an old, practically antique film print one would find in some random dusty basement. You strain a little to see what's going on and the whole events play out more like a home video than a professional film. This gives everything a strange sense of grounded realism, in spit of the surreal plotline. Malmrose loves the enigma presented in this film and gives a much lengthier video essay about this than he does most the other David Lynch titles.

Posted by Michael Adam Warren at 2:45 AM