Steamed Hams in Twin Peaks (A Parody of The Simpsons) 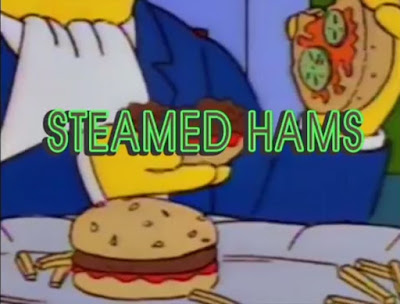 Perhaps it was just a matter of time before the classic "Steamed Hams" meme from The Simpsons (1989-Present) was crafted into the style of a Twin Peaks (1990-91) scene, but YouTuber First Issue Ever! (Steven Honeycutt) did it first and did it well. I like his re-editing to make it more in the style of David Lynch's TV series, utilizing a couple other Twin Peaks parody moments from The Simpson's run.

First Issue Ever! described his video in these terms: "What if the now classic 'Steamed Hams' segment from the Simpsons episode '22 Short Films about Springfield,' took place in Twin Peaks?" He then accredits the music to Twin Peaks composer Angelo Badalamenti and credits himself as editor "Edited by:@StevinFinite"

For more information on the Steamed Hams Meme, check out this web page that has been tracking the phenomenon. "Steamed Hams" was a hilarious segment from The Simpsons, Season 7, Episode 21, titled, "22 Short Films About Springfield." It was intended as a spoof on Quentin Tarantino's Pulp Fiction (1994), although if you ask me, the episode's anthological structure revolving around a city owes a little more to Richard Linklater's Slacker (1991).