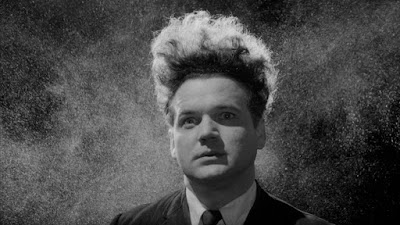 The online movie show re:View takes a nostalgic look back at older cult movie titles and examines them from multiple angles. This show is done by the same guys at Red Letter Media, who most famously did the hilarious Mr. Plinkett's Reviews of the Star Wars Prequels. If you ever felt like venting about Star Wars Episodes I through III, then that is the video essay series for you.
Although Plinkett's reviews has inspired a number of other YouTubers and other comedic film reviewers on the internet, with their more irreverent take on film criticism, re:View takes on a more traditional role of criticism in the vein of Siskel and Ebert when they would discuss different classic artistic films. Therefore, re:View's more of a conversational, slower paced, and respectful analysis of the various cult titles under discussion, which works well for discussing David Lynch's freshman film Eraserhead (1977).

Posted by Michael Adam Warren at 5:15 AM