Early yesterday, Oct. 11, Jason Bentley on KCRW Radio interviewed the venerated director David Lynch for a fascinating 40 minute interview to help promote the Festival of Disruption 2, which plays over this upcoming weekend in Los Angeles. You can listen to the entirety of the interview, including originally unaired segments, in the embedded audio player below.
Jason helped David open up and discuss Twin Peaks: The Return (2017) far more than usual, particularly about sound design, rejecting Trent Reznor's first submitted song for the Twin Peaks soundtrack, and much more! My compliments to Jason's work as an interlocutor in this, which is easily one of the best interviews I have heard with David Lynch. 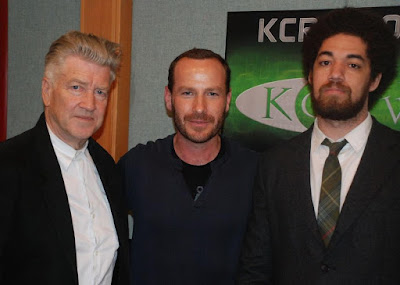 David Lynch is his typical charming self as he starts off the interview lamenting that he had to dress up rather than look like a bum, as he usually prefers. They delve into a lot about music and sound design, particularly David Lynch's choices for Twin Peaks: The Return's soundtrack. Overall, I would recommend this to any and all David Lynch fans and for people interested in sound design and music.