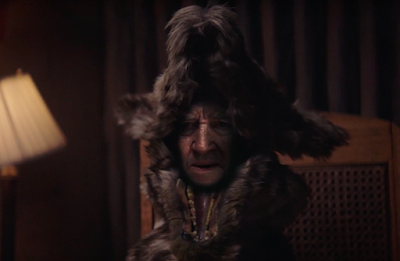 Although there are many artists, musicians, writers, and performers inspired by David Lynch, few have shown quite so much Lynchian style in their work as Steven Ellison, whose experimental music concepts go under his band umbrella "Flying Lotus," also occasionally shortened as the nickname "FlyLo." In his most recent album, Flamagra, he gets David Lynch to share a monologue he once heard the director recount at a party, but for the song "Fire is Coming."
Ellison managed to convince David Lynch to record this retelling of this strange tale for him again and used it as an imaginative driving force in this song and in the music video above. You have to see the music video for yourself to really get it, but David Lynch's face pops out of a wolf/dog sitting on a wheelchair and tells a group of post-apocalyptic children a story. The concept is crazy in the best kind of way, reminding me slightly of Too Many Cooks with its use of puppets blended with live action.