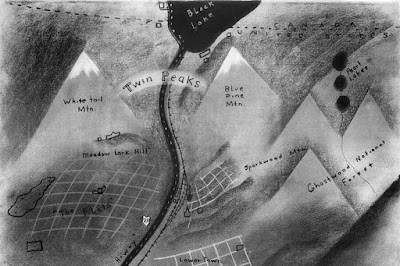 View this post on Instagram
Two years ago, we made a journey back to a little town with some amazing Douglas Firs 🌲⛰⛰🌲 Today I wanted to share a fun part of #TwinPeaks history: to create a sense of place for the show, David Lynch drew this map of the town.
A post shared by Kyle MacLachlan (@kyle_maclachlan) on May 21, 2019 at 2:49pm PDT


This version of the map, which David Lynch drew by hand in the medium of charcoal, was a slightly more advanced draft of the map that Lynch/Frost used in the original network pitch meeting to show the ABC Executives what kind of show Twin Peaks would be and what the place would feel like to explore week after week, episode after episode.