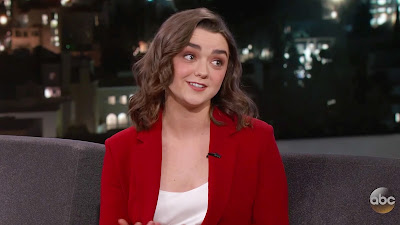 Everyone's favorite teenage revenge-seeking orphan turned faceless assassin, Arya Stark, has some seriously long and interesting scenes to shoot for the final season of Game of Thrones (2011-2019). Arya's real-life counterpart, the adorable Maisie Williams, reveals on Jimmy Kimmel that not only has she read all the scripts for Season 8, but so has her mom.
If Maisie's general happy demeanor and winking glee are signs of her opinion about the final episodes, then audiences are in for a treat in 14 months when Season 8 finally gets released. Maisie deftly avoids giving away any spoilers or too many sound bites that could be inferred to reveal anything about the show's impending finale, but she does joke around about some statements the President of HBO made regarding the filming of false endings to throw off spoiler hounds worldwide. 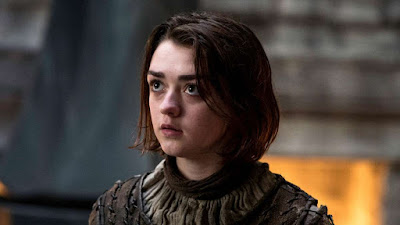 Maisie offers her opinion that "I don't think we've got the budget to shoot lots of different endings." And when pressed by Jimmy about how the President of HBO did say it, she hilariously responded with a wry smile, "As we know, sometimes presidents don't always tell the truth." 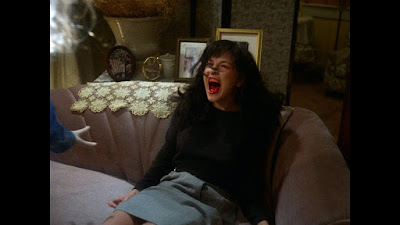 If true, then this would remind me of Mark Frost and David Lynch's unique gambit while filming the classic TV series Twin Peaks (1990-91), in which they filmed some fake reveals of Laura Palmer's killer as a bit of subterfuge to spies on the production set. 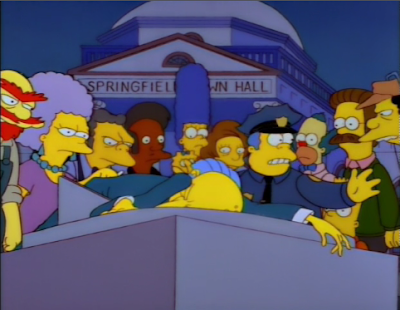 And The Simpsons humorously parodied this technique when they animated fake reveals of "Who Shot Mr. Burns?" in their notorious two-parter Season 6 Cliffhanger Finale and Season 7 Premiere, which in and of itself was a parody of the infamous "Who Shot J.R.?" story line in the primetime soap opera Dallas (1978-91). 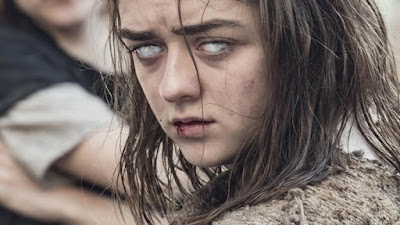 I was tempted to title this article, "No One Knows the Ending of Game of Thrones," as a double entendre and inside joke for hardcore fans, since Maisie Williams's character in the show, Arya Stark, is frequently addressed as "No One" by the ruthless Faceless Men Guild of Assassins. But I ultimately decided that would be way too confusing.