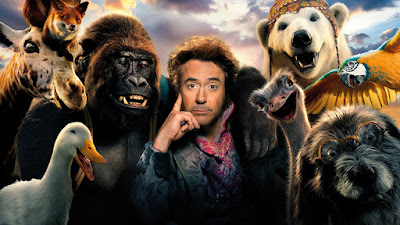 Fresh off of retiring his Iron-Man persona in Avengers: Endgame (2019), Robert Downey, Jr. has teamed up with Universal Pictures to re-imagine the classic British physician who can literally talk with animals. Although not free of flaws, this particular cinematic adaptation of the character of Dr. Dolittle is the most inspired and entertaining yet.
The character of Doctor Dolittle first appeared in a series of children's books written in the early twentieth century. And for most people living today in 2020, Doctor Dolittle is still likely best known for the 20th Century Fox musical Doctor Dolittle (1967), which starred Rex Harrison. The film is generally looked on somewhat wistfully and nostalgically, but it frankly is overly long, bloated, and a fairly boring children's film by most children's standards.

Interestingly, Quentin Tarantino has often cited this particular film production as the last major studio hurrah. When the Harrison-helmed musical bombed, it basically signaled the end of an era for old Hollywood and helped usher in a new wave of cinema with Coppola, Spielberg, Scorsese, and Lucas leading the way. Tarantino has long promised he would write a book about this important time of transition in cinema history, which I am looking forward to reading someday. 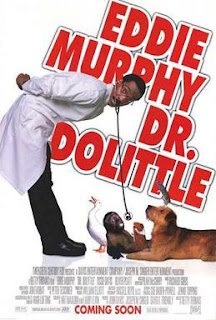 It should be noted that 20th Century Fox later put Eddie Murphy into a forgettable modern take on the classic premise in Doctor Dolittle (1998) and its sequel Dr. Dolittle 2 (2001), which tried to harness Murphy's popularity hot off of the wild success of The Nutty Professor (1996). 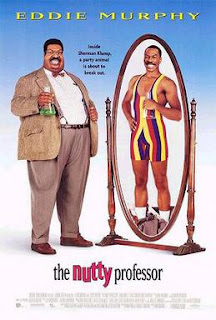 Although, as family-friendly comedic fare, the Murphy films were pretty successful, but they certainly had little to do with the original concept of the character and nothing to do with the books beyond the fact that Murphy played a doctor who could talk with animals.
Universal's latest incarnation of Dr. Dolittle (2020) is not exactly a remake of the classic musical Doctor Dolittle (1967), but is more of an exploration of the same original character from the books if that character continued to live and we catch up with him years later. Almost a washed up version of his former self after his wife leaves him on an adventure out to sea and she tragically never returns. Most of this back story is told through an animated vignette that acts as the film's prologue.
I feel like the filmmakers were attempting to take inspiration from Pixar's Up (2009), which features one of the best prologue vignettes of all time wherein we explore the entirety of a romance, courtship, marriage, and loss of a loved one within a relatively brief montage. High aspirations, indeed, but Dolittle's prologue does not hit home nearly as hard.
But give credit where credit is due, the casting of Robert Downey, Jr. was inspired and he is delightful to watch perform throughout the entirety of the film. Certainly Disney reeled a little when Downey retired his character of Iron-Man, which was one of the greatest cash cows for Marvel and then for Marvel-Disney after the studio was acquired later by Disney. Funny enough, Disney bought up the studio 20th Century Fox recently, too. But strangely, it is not Disney who is making this film, but Universal Pictures. Huh?
I get the impression that Downey's Dolittle was intended for a Christmas release to bring in the most family-friendly box office possible. But for whatever reason, the decision was made to release Dolittle in January, which is traditionally not a great time for box office success. Opening this film a month earlier probably would have given Dr. Dolittle (2020) a much better chance to stake its claim and rake in at the box office.
I have to assume the decision was made to release the film a month later to give it some distance from Disney's Star Wars Episode IX: The Rise of Skywalker (2019). It would be easy to assume that what was advertised as the last film in the "Skywalker Saga" would be an unbeatable juggernaut at movie theaters. But in the pursuit of more more breathing room, I am afraid Universal Pictures has unfortunately doomed this film to obscurity. 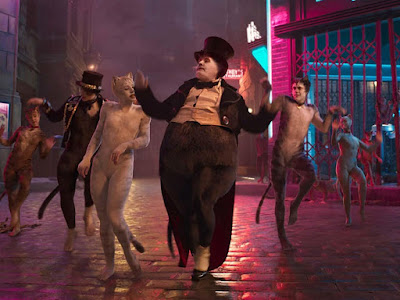 I will be the first to admit, this is not a great film. But if you listen to the majority of film critics about this movie, they would have you believe it is the worst film of the era. Ridiculous. That distinction clearly belongs to Cats (2019). If ever there was a film to revile from the past few months, it is not the best Dolittle film adaptation to date. Admittedly, that is not the hardest threshold to surpass. But still, Downey's Dolittle is actually fun, coherent, and engaging for the whole family. And that is not easy to do.
Robert Downey, Jr. elevates the whole film by delivering a worthy performance. The all-star voice talent helps bring his animal companions to life in a way that should delight most children and amuse their adult parents. The pace of the film is sometimes a little uneven and some of the plot contrivances get a bit convoluted for a children's film, but overall the experience is fun for the whole family and I found myself enjoying this movie much more than I thought I would going into it.
Go into Dr. Dolittle (2020) expecting a fun family film that brings to life the magic of talking animals better than almost any film since Babe (1995) and you will likely enjoy it for what it is, not despise it for what it isn't like most critics seem to do. I want to point out that many films intended primarily for children and their families are much worse and make adults cringe far more often than this better-than-average production.
When I look for a film to entertain children with, Dr. Dolittle (2020) is going on my list for one I would consider playing and watch it again with them. The movie takes you to interesting and exotic places alongside funny and witty characters. The starpower behind the animal voice work in this film is seriously talented. And best of all, the cinematic magic of being able to talk with animals helped bring out to play my own inner child. And not every movie can do that.